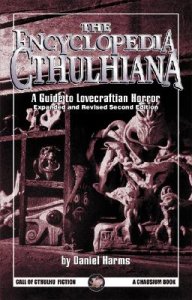 The Encyclopedia Cthulhiana - A Guide to Lovecraftian Horror - is a handy not-so-little book compiled by Daniel Harms. It is an attempt to catalogue The Cthulhu Mythos in its entirety, from the core stories written by H. P. Lovecraft to those of authors who influenced him and who were themselves influenced by him. Robert W. Chambers, author of The King In Yellow, fell into this first camp, influencing not only Lovecraft but also inspiring many other authors up to the present day.

As such there are many categories in the Encyclopedia Cthulhiana which are relevant to The Carcosa Mythos - and hence this wiki.

There have been three editions of the Encyclopedia Cthulhiana, the third of which was rechristened The Cthulhu Mythos Encyclopedia. The second edition expanded and revised upon the first, but also cut some entries judged less relevant. The third edition updated the second and restored some of the excised entries that readers felt should have been retained. Entries and references on this site are from the second edition (cover shown above) unless otherwise indicated.

Retrieved from "https://kinginyellow.fandom.com/wiki/Encyclopedia_Cthulhiana?oldid=3561"
Community content is available under CC-BY-SA unless otherwise noted.